Hi hello everyone! I’ve missed you all so much!! But we had a good week here in El Conquistador!

Abel was baptized this week!! He was so ready for it. The elder who interviewed him told us he feels like Abel will be someone who helps his family to stay active in the church! On Saturday he was baptized! It was a really interesting baptism because our ward isn’t very good at getting to things on time, so like twenty minutes after we were supposed to start, the choir was getting there to practice the musical number. But the font got filled up this time, so that’s the most important!! Our ward mission leader Luis, was gonna direct the baptism, and baptize Abel. So as they went into the other room to do the baptism, we ran outside to take a few pics with him in all white. But when we got back, we found out that Luis realized right as he headed to change his clothes, that he forgot his white clothes, so we had to hunt down a member with a car to run him home and get them, come back, change his clothes, and then do the baptism. So in the meantime, we all sat down in front of the font and we all sang some hymns together. It was actually a really special moment, even though it wasn’t planned!  The family was on the front row, picking their favorite hymns. We sang I Stand All Amazed, Called to Serve, We are All Enlisted, Nearer My God to Thee, all those good ones! Abel was really enjoying that moment, and his mom and dad even got a little emotional. it just goes to show that Heavenly Father has a plan! Everything happens for a reason. As the Chileans say "todo es por algo." In the confirmation, there was a part I especially liked, that they blessed Abel that he would be a light for his family, in this life and the next, that he would bless and minister to his brothers and sisters in his family, and in his faith. It was very special!! It was an honor to have been able to work with him!!

This week we have another baptism! It’s gonna be Catherine or “Cati”. Her parents were going to be baptized with her, but we found out that they are passing through some family problems, and they need a little bit more time for them to be ready. But I know that Cati will be a light for her family and help them maintain the goal of being baptized! We are very excited to work with them!!

Funny story of the week. On Sunday morning, an investigator named Javiera who is 15 got to come to church with one of the young men that lives near her. But she arrived with her dog, because he followed them all the way from her house! So it just comes right on into the church (which is not that uncommon of a thing in Chile :). So we are all trying to kick it out and it just keeps escaping us. Finally, we get it out and we take Javiera to her class. She was so embarrassed her dog came in, ha-ha! But then we came back out and we realized that one of the members came in, and the dog got back in, and it ran into the chapel, where the other ward was getting ready to have sacrament meeting. So it just starts running through the whole church building, and Hna Marques and I are running behind it screaming "Jesse, Jesse ven!!" trying to get it out before Javiera sees it. Hahaha! So then we lost him, but we knew he was in one hallway. So my comp goes to peek in one room, and I go to peek in the other. Jesse comes running out the room where I looked, and goes booking it down the hallway. My comp steps out of the room and just biffs it right on top of Jesse. She gets nailed by this dog and just hits the floor. I’m just in tears by this point (laughing). So we finally get it out and we go to the bathroom to clean ourselves a bit. My comp says "can you believe we had to kick a dog out of here?" and I said "ya, but at least we managed to do it". And then the door slowly opens and in walks...... JESSE THE FREAKING DOG!" I cried again. Hahahahhahahhahahhah! You guys it was so funny... so long story short, wash, rinse, and repeat, and we got him outta there!
Wish us luck with our baptism this week! Les quiero muchisimo! 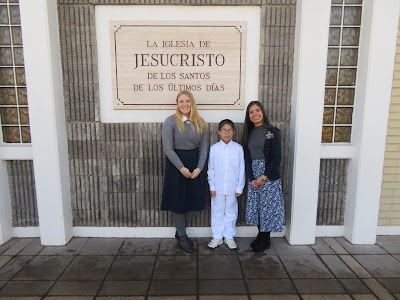 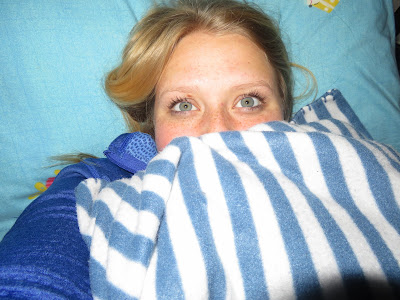 Trying to stay warm with no heater! 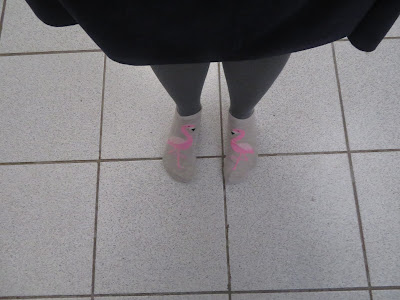 What Hermana Stanley wears under her boots to stay warm 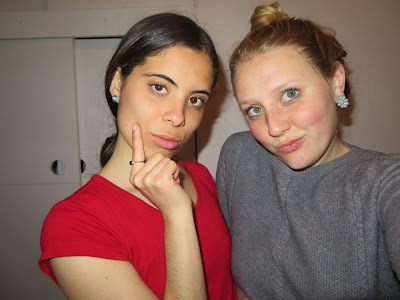 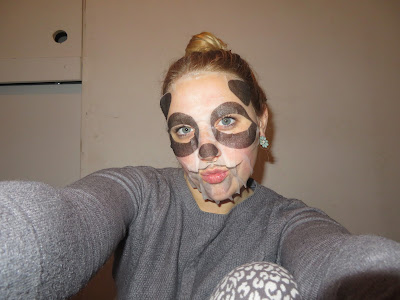 Holi, como estai??  This week, a number of fun things happened!! On Wednesday, I hit 9 months! My hump day has officially come and gone. It’s really crazy! Hna Harques and I had a small spa night. I did pics, but the computer isn’t working today, so it’ll have to be next week! But anyway, I also had my interview with Presidente, which was great! We talked a little bit about how, as Christians, we are trying to put off the natural man, and that is a lifelong effort. It’s hard sometimes because we are always fighting temptations, and it’s not a battle that we fight and win one time, but rather a battle we fight everyday of our lives as we strive to be more like Christ. It’s a beautiful sacrifice that we make as Christians.

I want to tell you a story. It all started several years ago, when the elders of El Conquistador were probably knocking doors or something when they found a young guy named Pablo! Then a few months ago the elders found him in their area book. They started teaching him, and they invited him to an activity. He invited a good friend Dayana, who’s 21. Remember that Luau we had? Well, Dayana decided to come to our luau, and then the elders started teaching her. Dayana had a lot of potential, but she wasn’t progressing a whole lot, so this last week, they decided to pass her to Hna Marques and Hna Stanley (who we will refer to as las conquistadoras in our story :) SO, las conquistadoras went to visit her, and when they got there, the met Dayana’s friend, Caterine. Caterine, was very interested, and said that she felt like her family was very far from God. So we invited her to come to a Talent Show activity we had on Friday! Caterine came, with her mom and sisters! The members there invited her to church, and even though Caterine never told the hnas that she was going to go, on Sunday morning, she showed up with her mom, dad and sisters

CAN YOU GUYS SEE HOW HEAVENLY FATHER WORKS MIRACLES??? I just want you all to know that I testify that He has a plan, and it is perfect. And the point of his plan is so that YOU can be happy! So what do we learn from this story?? A few things. For current and future missionaries:  1. write in the area book diligently 2. invite everyone to activities 3. teach to find and find to teach. 4. believe in the people, believe that they really are looking for something!! 5. invite people to make an keep commitments, because you never know when they’ll accept!!

Well Hna Marques and I are obviously a little bit ultra-stressed out because that means we have four investigators with fecha bautismal. I’ve never had more than two at a time!! I really want you all to pray for our fechas. Pray for Abel, who will bv be getting baptized on Saturday, and pray especially for Caterine, Carola, y Victor Gangas Figueroa! Pray that they can pray and ask Good if Joseph Smith was a prophet, and if the Book of Mormon is the word of God. And pray that the answer can come quickly, that they can recognize it and act on it!! PLEASE HELP US WITH YOUR PRAYERS. This family really needs your help!!!! Well, I love you all a lot, and that’s basically the big time highlight of what happened this week. I love being a missionary!

I love you all,
Maddie

Well, its official. I honestly never thought this day would get here, but I have officially hit my halfway mark. Well, I hit it tomorrow. Its honestly a little bit sad, sort of bittersweet. I was a little down yesterday because it hit me in a very real way that this experience that is SO unique- is halfway over. And in only nine months more, I have to be an adult- no more excuses :/ ha-ha but I’m not trunky, don’t worry!!

Not a lot happened this week. We are in vacaciones di invierno right now, so a lot of people are travelling, and yesterday was a dia feriado (a day when no body works) so it’s been pretty dead. But we enjoyed igual (the same)! Hna Marques and I always have a good time, it pretty much doesn’t matter what’s going on in our lives, we laugh and smile! On Friday, we also had divisions with our lideras capacitadoras!! My capacitadora was...... HERMANA SCHENK. Ugh I love her. It was so fun to be with her for a day again and learn from her and all that. We had such a good time, and she cut my hair :) Don’t freak out, it was the smallest hair cut I’ve ever had in my life, she literally just cut what was dead and now my hair feels great!!
As a spiritual thought this week, I’ve been reading in the book of Ruth. I love her story! And I’ve been thinking about what qualities Ruth possesses that we should all try to have. I decided that above all, she has two things- Constance, and Selflessness. She didn’t think about others as she stayed with her mother in law, she was constant in her decision to follow her, provide for her, and in the end she played an important role in her posterity! God was able to work through her because she was constant and selfless. May we all be able to be a little more like Rut this week :) Love you all lots! 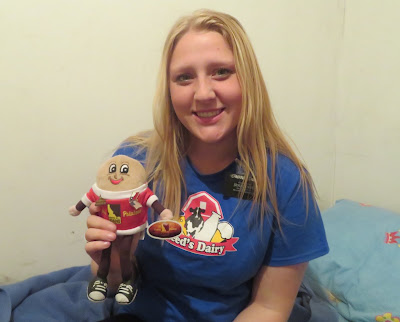 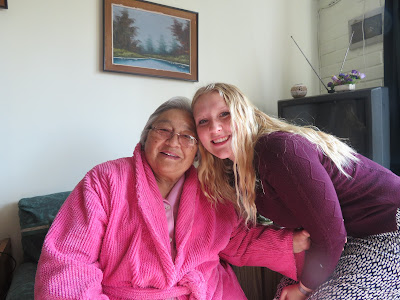