A Good Week for Maipú!

Hola! Como están todos?? This week was a good week for Maipú Dos! But in all reality not that much happened... Until we started FASTING. First of all, we were in a trio this week with Hermana Dudley because her companion went home a week early, but cambios weren’t until today. Dudley was in Maipu with Hermana Dinamarca the cambio before me! So it was really cool! We started our fast and one of the first things that happened Saturday night was that we went to find this really amazing contact Romina. When we went she wasn’t home, but her younger brother Nicolas was, so we went in and talked to him! You guys, he was teaching me heavy doctrine...  He was talking about how he doesn’t really understand why bad things happen to good people, and my companion is looking at me like "okay chiquilla, le toca!" and I was all ready to answer when he said "but then again I also think that people can choose and that’s not God's fault! Also, how can we know good if we don’t know bad?" and he just continued like that. And when he got done answering his own questions, all three of us said, "...ya... basicamente eso" Fue LOCISIMO. Then we went to our dos little abuelitas Marta y Nancy, who we love dearly, but we never really thought they had much potential because the little old ladies are a little slow to change sometimes. But we invited them to church and Marta said yes! We called in the morning to see if she was going to be able to come, and she said she was already ready and waiting! I was almost crying!! So we called the bishop who said he could drive her, we went to her house, we helped her into the car of the Bishop. And it was just like perfect! She was so SWEET and the little old ladies in the Relief Society were so sweet with her. On Sundays we are allowed to do divisions with the members of the ward if we have lots of people to pick up. So during the second hour, and the class for the investigators, Dudley and Dinamarca had to leave to bring someone to Sacrament Meeting! But I stayed because I had to play the prelude for Sacrament Meeting! At the end of the class, the elder who was teaching said, " Hermana Marta, le esperamos la proxima semana" and she starts to tell the whole class about how the first time the sister missionaries came by, she was grateful, but they never came back. And years later she remembered them and prayed that she could find us again, and three days later we found her in the feria ;) I was in tears by this point, and partly because I felt guilty for never seeing her potential! But we learned! EVERY CHILD OF GOD HAS POTENTIAL! and yes, that includes YOU- the reader! Later we found an investigator of gold who approached us!! And then HE called US. That never happens...we already taught him once and he is great! You guys, Maipu has so much potential, which is good! because we had transfers today so I am officially halfway done training, We are sure that I will be here one transfer more than my training. I have THREE MORE MONTHS to be able to see all of this grow! Really, missionaries are the happiest people on earth, because we are always focused on serving the Lord :)


And now the sad part :( but not that sad! When I heard that our dear prophet Thomas S Monson passed way, I felt a few emotions. A little bit sad, because he was the prophet of my childhood! A little bit excited to see what changes come with a new prophet! a little bit worried about how on earth we teach about a living prophet now... but more than anything relieved! He must be so happy now! For someone who served the Lord so well, this is only the next step! I love you all and I pray we can all try to follow the example that President Monson set for us! 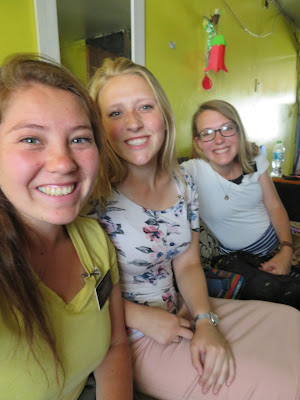 With Hermana Dinamarca and Hermana Dudley