Hi all! This week was a really good week!! First of all, on Wednesday, we had our conferencia multi zona, where we learned about our new plan de cambio. As always, we will be focused in exactly what we need here in my sector. CHAPTER 11 OF PREACH MY GOSPEL. I love this chapter!!! Hacer y guardar compromisos (Making and Keeping Commitments)!! We had a bunch of training on how we can raise the quality of the commitments we leave to our investigators, how we can verify with them better, and also how to extend the baptismal invitation even better!! Hna Marques and I put it to the test with an investigator we have whose name is Angelina; and now she will be preparing to be baptized on the 28th of July :) As some of you may know, we’ve been a little challenged here in getting investigators to come to church. We actually went about a month without anybody coming and we were so frustrated. So this week, we humbled up and tried to apply what we learned in the conference, and in the end, we had SIX INVESTIGATORS AT CHURCH!! We are soooo happy. The complication is that Angelina has to come to church two times, and that means sacrament meeting, before she can be baptized. But Angelina’s mom is very sick with cancer. So every Sunday she has to give her mom a morphine shot at 11, and our sacrament meeting starts at 11:30. It is really far, like an hour and a half away in the subway. So we really need you all to be praying so that Angelina can find a way to be able to come, because she wants to get baptized so badly!!! I know if we all pray with faith, God will prepare a way.
As far as the fourth of July goes, I completely forgot. So did everyone. We were all in the conference and we all forgot. I was gonna wear my pin that has a Chilean flag and the US flag, which I currently have pinned to my spuddy buddy (stuffed potato guy), but I forgot. In the winter, it just doesn’t feel like fourth of July ha-ha! We had another little miracle this week- Familia Miranda is a less active family. The mom especially has always wanted to come back, but has never quite gotten there. But this week her son turned 9, and passed on to be our investigator. He really wants to get baptized, his name is Abel! The struggle is that we all want the Hno (brother) to come back, and he has smoking problems. So we ve been putting our focus in the hno Gustavo, and guess who came to church yesterday, with all of his family! We were so happy we took a picture of the moment. Another difficulty is that there are few members of the ward that really believe in him. He came to an activity that we had on Saturday, and we were so happy that we were telling all of the ward members that he came. Quite of few of them said "ya that’s great, but the real miracle will be if he comes tomorrow." I love the members of my ward, but I want you all to promise me you’ll never have that attitude!! WE should always have faith in the people around us, because if we don’t, whose gonna have faith in us, that we can change our lives???.

This week, we set ourselves up and contacted in the feria (Chilean farmers market type thing). It went really well; we went with two elders from our ward. Here in Chile, they greet "con beso" meaning they great by giving a small hug and a kiss on the cheek. As missionaries we can do that with women, but not with men even though its very normal for the Chileans. So something that happens often is that men try to greet s by kissing on the cheek, and its SUPER UNCOMFORTABLE because we like stick out or hands and we’re like no no no no no helpppppppp, until they catch on. Ha-ha its honestly probably the worst part of the mission, lol. Every once in a while we find someone who we call a "snake" because even though they catch on that we aren’t comfortable greeting them like that, they insist, and they literally take your hand and pull you towards them. It’s awful. So this happened to my poor companion. I threw my hand in there so fast so he’d get the message, he got the message, and then tried to do the same to me. So were like HELPPPPP cuz he tried a few times, when one of the elders from our ward comes running. He jumps in there and he’s like "dude if you want t to give a hug, give it to me." So this guy was not happy with that, and started to try again with my poor comp (its very possible this man was drunk). So freaking Elder Barroso from Brazil, says "mire, alla hay una mujer linda (look, there is a pretty woman)!!" and turns this guy so he walks the other way. Hahahah it was awful but funny at the same time. But don’t freak out mom and dad, this is a very normal situation here ha-ha.

Well our investigators are doing great!! Almost all our best investigators have to get married before they can get baptized!! But now we have two little miracles- Angelina and Abel. So I’ll update you on how it goes this week!

Love you all,
Hermana Stanley 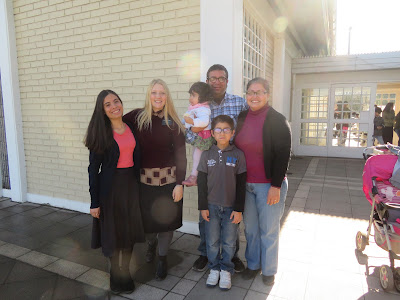 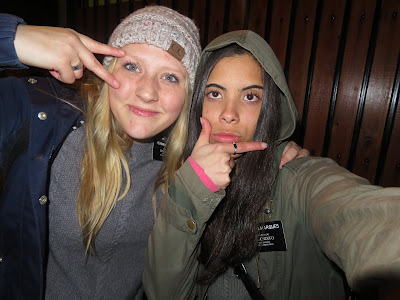