Well you guys, a lot happened this week! Firstly, I completed my first three months as a missionary. It’s surreal I can’t believe that I’m already one sixth done. It’s sad and exciting at the same time! On Tuesday, we got to watch the first presidency announcement! I’m really excited for the new focus we will have on temples, and receiving the blessings they contain for us! We went and visited one of our investigators whose name is Lucy. She’s a little old lady, and we had a lesson with her where she really only wanted to rip on the JW´s. It was kinda funny.... But she loves everything she learns with us and she has been progressing a lot! Remember when I told yawl about Cristobal? Who is going to baptized February 3rd? He loves us so much! One day we were walking down the street and a motorcycle started honking at us, which happens all the time so we just ignored it. But it kept honking, so we looked and it was Cristobal. It was so hot that day and we had nothing in energy. He stopped and bought us each a soda, then ran across the street to give them, to us! We have been answers to his prayers, and him to ours :) Its really cool how the Lord works like that!! On Wednesday, THE POPE CAME TO MAIPU. CHILE, SANTIAGO, MAIPU, PLAZA MAIPU. It’s the sector right next to me, my zone, I’m in plaza Maipu as a I type this email! It was really cool! Which reminds me, if you want to see something cool I can see from my apartment, google "catolico temple Maipu" that’s where he was! It’s cool that of all the places in the world, I was like three minutes from the pope! Don’t get me wrong, that day was LA HIEL. No one was home ha-ha but it was cool. I realized something scary this week. It is almost certain that in one month, Hna Dinamarca se va, and although I won’t be senior companion, I will be directing because I know the sector.... I’m STRESSED. I do not want that responsibility so early on, but I think the Lord must think I’m ready and I need the experience. Prayers for me please, ha-ha. We are teaching a lady whose name is Lucrecia, and she is LOCISIMA. She is 60, was a carabinero, or a police officer, for like 40 years, and now she teaches guitar and voice. She sings folk music! she made me sing for her, so I sang a little bit of Diemainacht. I’m gonna grab a video of her next time for you! But seriously, this woman has all of the sass. I love her :) Yesterday we had lunch with a Venezuelan family! Turns out I love Venezuelan food! There are a lot of Venezuelans here in Chile because the economy is good here. They speak so fast. Not quite as fast as the Chileans, but fast and different. I can understand them pretty okay actually. Alright, yawl want random stuff about Chile? Here goes. They don’t have mops. I have not seen a mop since my house. They cut a hole in a towel and throw it over a broom. I think it’s pretty smart. They also always use the last name of their mom and their dad. First their dad, then their mom. But for short they go by the first apellido. Por ejemplo, my companion’s name is Pia Javiera Dinamarca Parra, and she goes by hna Dinamarca, her father’s name, even though she has no relationship with her father. I thought it was interesting. It’s also quite rude down here to have your hands under the table while people are eating. That’s about all for the week!! I love you all! Being a missionary is the greatest thing ever because you get to watch the Lord work miracles in other people and in you :)
love
Hermana Stanley 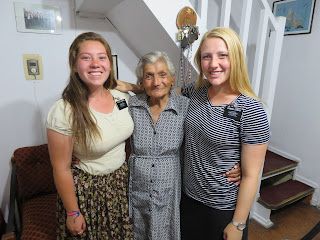