Okay, no time today so sorry if I am a little scattered! Last pday we were at Lider (Walmart) and they definitely tried to get my passport number hahaha! I may be blonde but I’m not stupid! We went into the store and there was this dog laying on the ground not moving. As we came back out an hour later it still hadn’t moved so we thought it might be dead. A couple of hours later we were back and it still hadn’t moved, people were like stepping on it! Definitely dead ha-ha. Also the stray dogs on the streets here cry, so we will be sitting in class and we can here dogs crying! it’s kinda sad ha-ha. I ate a medicino the other day!! It’s like sponge cake with chocolate and coconut around the outside, soooo good! THANKS FOR THE PACKAGE I loved all of the candy and I love the t shirt too! I wore it to exercise one day and now all the Latinos say MTC instead of CCM. Speaking of exercise, the Latinos have been teaching me how to play soccer, which I am not as terrible at as one might think! But man it is stressful to have a tico (costa rican) yelling at you in Spanish about why you missed that goal. Also I got nailed in the thigh the other day by a soccer ball and I have gnarly bruise coming in ha-ha. I HAD MY FIRST CONTACT. We were getting ready to do exercise and these guys came by and shook our hands, and one stayed and talked to us. He was hard to understand but we found out he wasn’t a member! After exercise my comp and I went over and talked to him! He was very interested because his dad is a less active member! We had just practiced going around the temple grounds and testifying about the book of Mormon to members, so we just did that and then we ran and got a LdM for him. As we were going back to class we saw him sitting there reading it! It was so amazing. Tomorrow, me and my companion will be out on the streets contacting for a few hours! Then on Friday, we are getting assigned to missionaries in the Este mission, and we are going to go proselyting with them for a few hours, without our current companions, and we are supposed to be the senior companion. IM SO EXCITED BUT HELP I DONT SPEAK CHILEAN. The Zone Leaders (forgot how to say that in English for a sec) got into a first fight this week LOL elders son muy estupidos a veces. The Latinos left yesterday, and they decided that they wanted to do a musical number together so they had been practicing every night before bed. Here’s the thing, by all standards Latinos are horrid singers, except that they LOVE music and they sing with their whole souls, so hearing them sing is the scariest thing you’ve ever heard, and yet the most beautiful. Out of four group meetings on Sunday, I played the piano for 3 of them, and then I sang in the fourth one. I played for Sacrament meeting! It was really good! The meeting that I sang in was the evening Devotional, where the guest speaker was the president of the Santiago sur mission! the only people in the CCM yesterday were me and the other 7 girls in my district. Yesterday was the best day too!!! We were supposed to get new teachers which I was not that excited for but then we found out we get to keep both of our old teachers!!! Then Hermana and Presidente Brady ambushed us before exercise with cupcakes, and we sat and talked about our goals as a district. Then for dinner, we had pizza and ice cream, with Pres and H Brady. It just doesn’t get better than that ha-ha. I gave everyone in my district a potato pin (they love them), and I showed them my spuddy buddy and my scarf. They loved it ha-ha. Something I’ve been pondering on this week!  As we are tuning between two pitches, when the pitches are really different, they don’t sound that bad. But as we get closer and closer we create dissonance which sounds awful! Similarly, as we become more like God, we recognize our shortcomings more and we can be very hard on ourselves, but we MUST remember that it only sounds so bad because we are getting closer! Love you all lots, thanks for the pictures, I’m gonna get them printed out at Lider next week, and NO I won’t give them my passport number ha-ha. Hasta la proxima semana! 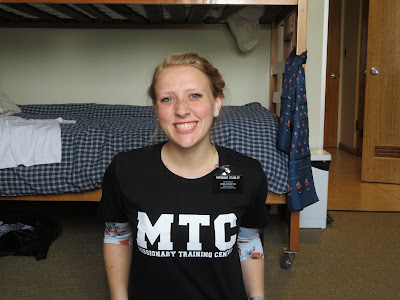 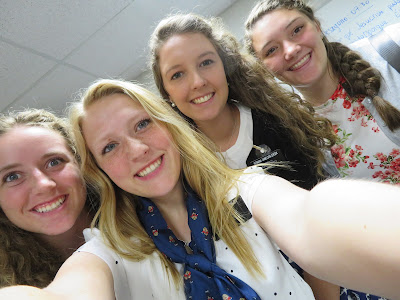