Hermana Stanley arrives at the CCM!

Hola! Okay, first of all my flight down was just fine. Met up with three other sister missionaries in Salt Lake headed to Santiago, and then three more in Atlanta. We had to cross the Atlanta airport, but that went just fine. I sat by a guy headed into Atlanta who was a pastor or something that had worked a bunch with Mormons and he was very kind. The seven of us who met up in the airport are all in the same district, plus one Aussie, who is actually going to be the nurse in my mission! She is super cool and her first name is Maddie! There are no elders in my district, which is a first for the CCM here, I think. 5 of us are going to the Santiago West Mission, others to Viña del Mar and Rancagua. There is definitely no intermediate Spanish class here, it’s too small! But the good news is that we are surrounded by Spanish speakers! In my room, there is a girl from Guadalajara, Mexico, Lima, Peru, and I forgot where in Colombia. They don’t speak any English....its great practice and they are really fun to talk to! The Mexican sounds like she is speaking in slow motion compared to the Chilenos, so I never wanna hear a missionary in Mexico complain ever again! Ha-ha just kidding! They feed us A LOT and ALL THE TIME. Also, much respect for the Latinas, because those girls can EAT FOR DAYS. Super jealous! But the food is all pretty healthy. Weirdest thing so far was some sort of lima bean type dealio, and it actually wasn’t bad. They do eat rice with everything which I love! They also eat all of their cereal with yogurt instead of milk. I totally love it! I play the piano 2-4 times a day (not well I might add) but I try my best. The very first time I played they made me play Llamados a Servir. oiiiiii. Every day we exercise and we alternate between volleyball and futbol. When we play vball, gringos win, when we play futbol, Latinos win ha-ha. It is so much fun, we all love the outside time a lot. I LOVE Sundays here at the CCM! They let us do most of our meetings in English so we can just focus on the spirit. It’s nice to just be spiritually encouraged for a day. The CCM presidente Brady, has a 37-year-old daughter with down syndrome. Her name is Annie and I love her. She is such an inspiration to me. She wears a name tag, and she helps her mom pass out treats. She makes the missionaries smile, she is amazing because she is a missionary just like me, doing the service that she can! She introduced herself to us over the pulpit and she said, "When Jesus comes, I am going to get married." And in that moment I knew that she would have that opportunity, there was and elder in front of me who was crying so hard I had to give him some tissues. We had a super amazing fireside the other night, presidente had us pick our favorite hymn, write it down, and then Annie pulled a few out of a hat. Those who got chosen spoke about why it was their favorite, and then we sang a verse in Spanish and a verse in English. Annie asked if we would sing Silent Night because it is her favorite. I guess she learned the sign language to it when she was little. SO SWEET. One girl in my district was in my first ward up at BYUI. I LOVE HER, she is so fantastic!! We have had some pretty fun Spanish slip ups in my district, like mensaje/masaje, y huesos/huevos. H. Pugmire at the end of the first vision the other day said SPOON instead of escuchalo by accident. I have the missionary purpose, first vision, DyC 4:5, something in second 2 Nefi, and articles of faiths 2, and the baptismal invitation all memorized in Spanish already! My companion really likes to memorize stuff. Her name is Hermana Sandall. I can’t believe how much my Spanish has already grown. Presidente told the Latinos to learn English, so now we are having a riot in the casino every day over what language we are going to speak ha-ha. Everyone wants to touch my hair. The other day I had extra time so I put on makeup and they all laughed at me about how light my make-up is. THEY DON'T HAVE PEANUT BUTTER DOWN HERE HELP SEND PB! But they have some in the cafeteria at the CCM for us gringas ha-ha. That’s all you guys! Classes are great, I’m learning a ton, its hard work but I love doing it. Everyone pray for me please, I need all the help I can get. 1 Nefi 13:37. Heart you all    Hermana Stanley 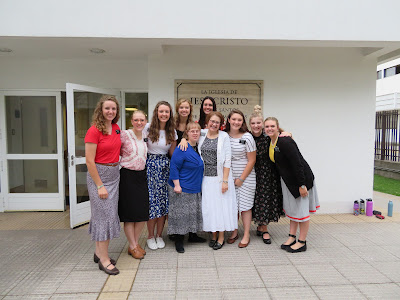 With my district, Hermana Brady, and Annie 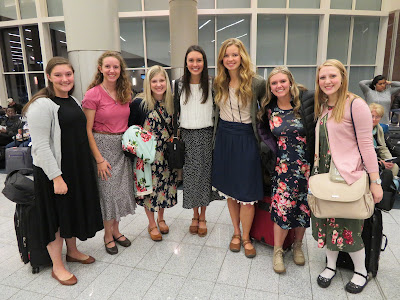 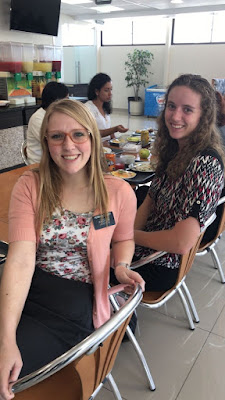 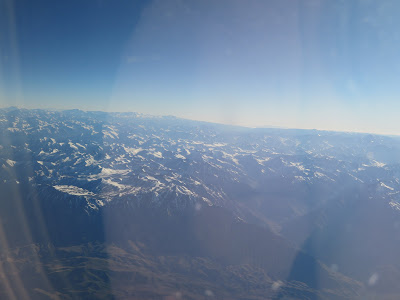